How to choose your jacket button stance

What is button stance? And why would you choose one over another?

The reason that button stance has such a grand name is that it can have a surprisingly striking effect. Button stance can affect the shape of the V around the lapels and the perception of where the waistline sits – you can work out your natural waistline by bending to one side and making a note of where your skin creases.

Let’s consider each of those in turn.

With a low button stance, your waist button sits underneath your natural waistline; the buttons create a long V-shape on the jacket, giving you plenty of scope to show off your shirt and tie.

With the waist button actually on the waistline, you’ll see a similar outcome to a low-button stance. The V will still be long.

Low and natural button stances can create a nice-looking V shape. This long V is helpful for those who are a little portly around the middle, creating the sense of a longer upper body.

A natural or slightly lower button stance works well for most body types, except extremely tall & thin types or a physique with short legs & a long upper body. Extremely low button stances should be avoided, however, especially if you carry a little weight around your middle.

Men with bodies that are in proportion will benefit from a high button stance. This shows less shirt and tie – a nice visual effect. The lower half of the body will also seem longer. That’s a good outcome for those with shorter legs and a longer upper body.

Moving the waist button on a jacket creates the illusion of the waistline’s position also moving.

If you’re unhappy with the natural position of your waistline, you can create the optical illusion of it being higher or lower, simply by changing your button stance.

Choosing the perfect button stance for your height

If you’re tall, a natural button stance will avoid the illusion of even longer legs. It will shorten the look of the upper body also. But there are other tricks a tall man can play: accessories such as pocket-watch chains and low tie pins can draw the eye to the centre, making you look more in proportion.

A shorter man with a long torso that makes his legs look short can raise his natural waistline to make his legs seem longer. For the shorter man with less torso and longer legs, a lower button stance will make his upper body appear longer.

Shorter men can also make use of high-placed items such as ties, high tie pins, lapel buttons and fancy collars to draw the eye higher. 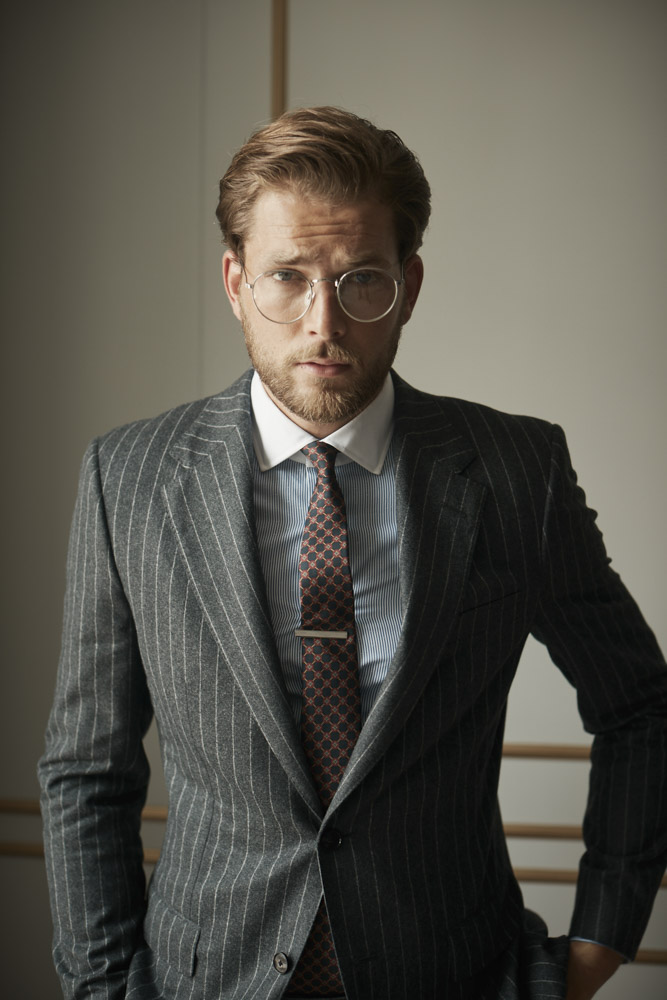 (Above) Accessories such as pocket-watch chains and low tie pins can draw the eye to the centre, making you look more in proportion.

Why not book a fitting at a Senszio Trunk Show in a city near you? Our expert travelling tailors will talk you through every detail of your bespoke suit.